Consumer quoting allows prospects to get quotes directly on your existing website. Prospects that are accustomed to online quoting will have a seamless experience on our platform

Email campaigns help you stay connected and communicate with potential prospects. Manage your email marketing campaigns and create touch-points directly in the platform 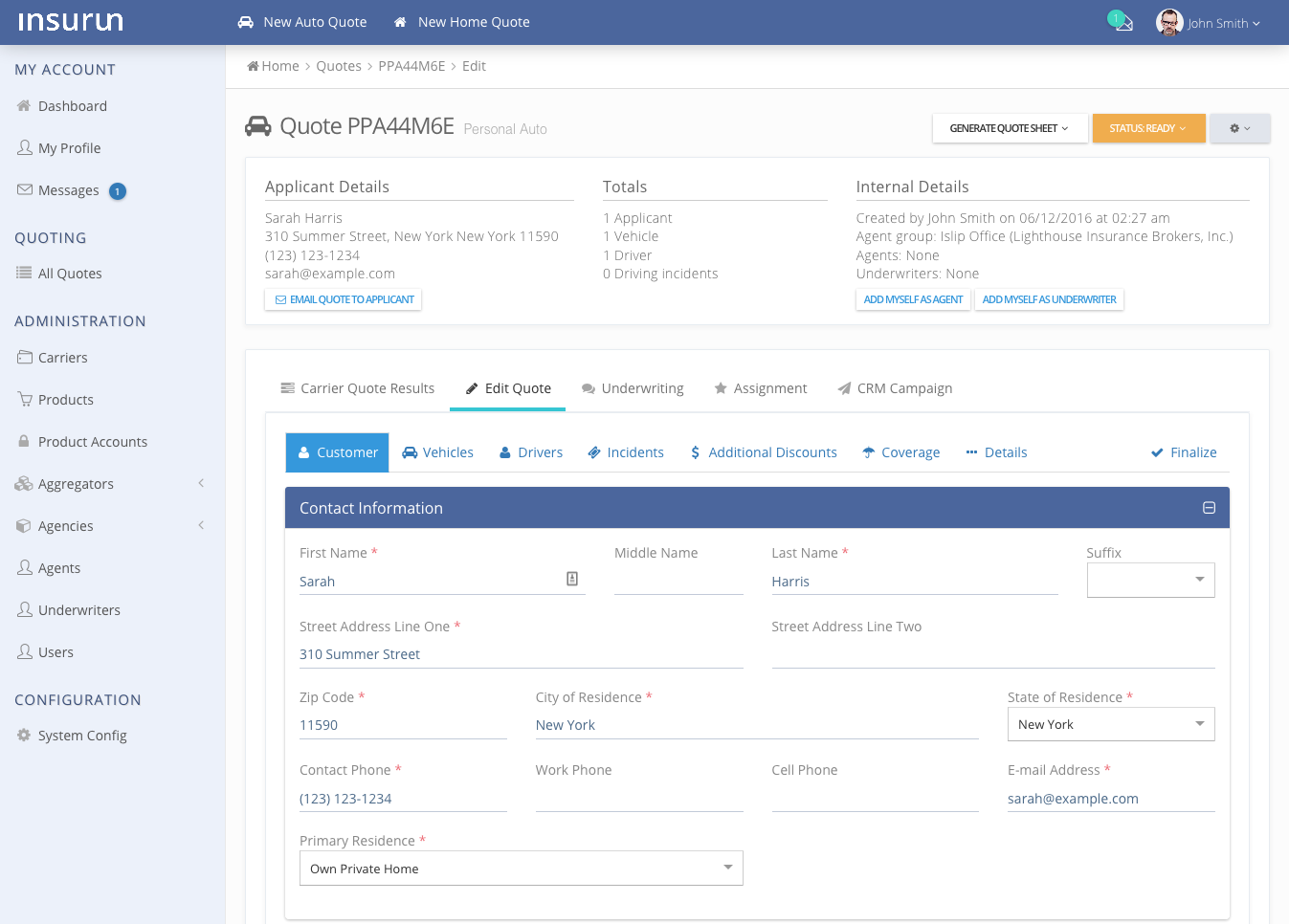 Our web-based, Software as a Service technology allows agents and consumers to get instantaneous quotes from multiple carriers in multiple states. Carrier quoting and prospect management has never been easier. 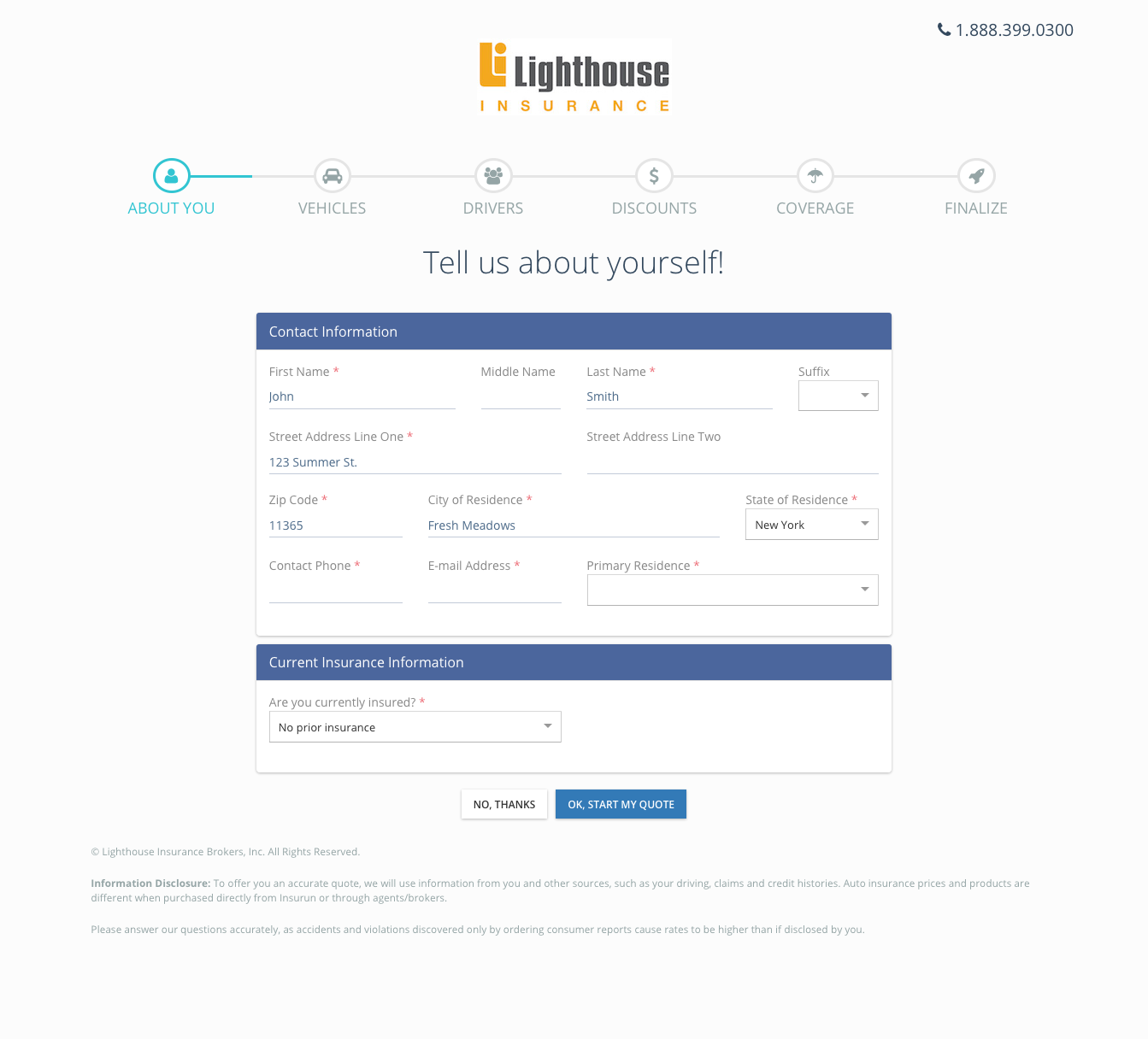 Consumer quoting allows prospects to get quotes directly on your existing website. Prospects that are accustomed to online quoting will have a seamless experience on our platform.

Email campaigns help you stay connected and communicate with potential prospects. Manage your email marketing campaigns and create touch-points directly in the platform

Read More
Our leading edge web-based Software as a Service (SaaS) technology allows agents to get instantaneous quotes from multiple carriers in multiple states. Carrier quoting and prospect management has never been easier!

Quotes obtained Agents in and out of the office are fed into our Quotation Management System. This system alerts all interested parties that a customer quote has been initiated, and once a carrier chosen, several underwriting/binding processes like retrieval of required documents, generation ACORD application(s) and alert emails to Agency Management. Data acquired by insurun can be loaded quickly loaded into any Agency Management Systems.

Whether or not a quote request closes, the data captured during the insurun online application process can be of extreme value like direct insurance cross selling, cross product selling through analysis of the prospect’s digital/social media footprint and better managing loss ratios.

insurun provides real-time metrics at all levels of the Agency’s sales organization. Whether you are a sole-proprietor, or the CEO of a 20 Agency organization, insurun captures, process and reports on bind rations as well as agent productivity by location, day, month, quarter or annum.
With Insurun, you get

Like our Agent Portal, insurun’s consumer portal provides prospects with the ability to generate real-time rate comparisons in seconds from a white labeled insurun link on your current website. Four to five times the leads are generated directly from the Agency Consumer Portal site than by the Agent Portal alone, resulting in an exponential increase in new business.

Once a lead has been captured by insurun’s portal an URGENT email it is sent to your agent nearest to the prospect. From there, Consumer Portal behaves a lot like like Agent portal, automatically generating required documents and ACORD applications to bind.

insurun provides real-time metrics at all levels of the Agency’s sales organization. Whether you are a sole-proprietor, or the CEO of a 20 Agency organization, insurun captures, process and reports on bind rations as well as agent productivity by location, day, month, quarter or year.

Create drip and targeted email campaigns to let your clients know that you are listening.

There are approximately 40,000 independent insurance agencies in the US alone. Increased competition from direct and captive insurance carriers, all of which have embraced technology as a way to attract new business, continue to gain greater market share at higher margins than independent agencies. Technologies heretofore unavailable to the independent agent due to delays in smaller national and regional carrier adoption are now available as these carriers have begun to integrate their platforms with the independent agent. This is good news indeed for the independent agents as software companies like insurn can now coordinate its quote data capture technology with carrier data receiving technology.
Established agencies that have embraced technology have continued to grow through acquisition and aggregation, whereas, traditional agencies who have not adopted new technologies have experienced little to no growth. This is evidenced by a study done by “Agency Universe” that found an initial decrease in the number of independent agencies from 1996 through 2006. Since 2006 the number of independent insurance agencies has begun to increase. This too is good news for the independent agents as a growing market is a fertile one. High level findings of the study revealed:
This study suggests a shift in mindset on the part of the traditional independent agent who historically avoided the use of technology as a business enabler. Currently, agents are embracing technologies to thrive and compete in this ever changing industry. Agents are using these tools to streamline manual into automated business processes, starting from acquisition through prospect management, binding and post-sale customer maintenance.

After many years of development and accumulation of business knowledge obtained through the independent agent channel, we successfully launched our V 1.0 product in 2015. The initial version, set out to address the challenges that face the independent Property & Casualty Agent within the context of the ever changing insurance industry. This was accomplished by interviewing and listening to some of the largest brokerages facilities in New York. For example, an agent’s current daily quote procedures for various personal and commercial lines were flow-charted for insurun to review and envision how leading web technologies could better streamline and automate/make more efficient these procedures. We learned, the independent agent was still contending with the inaccuracies and/or manufactured rates and strength of direct writers. Moreover, independent agents did not have streamlined approaches to consolidate multiple carrier quotes to maximize results. All this, while the direct writers and their technology further disrupted the agent base. To solve this issue, we created our insurun Agent and Consumer Portals, and in doing so, pioneered the concept of accurate real-time rating and quote presentation. Rating Engine enables insurance agents to generate accurate, real-time Auto and Home rate quotes from multiple insurance companies’ sites with a single data entry point.
Our goal is to become the leading real-time solution vendor for independent agents. Our product is ever changing as we continue to develop solutions to assist the independent agent in this fast changing technological environment. Our mobile first approach we believe will bring the insurance agent and its consumers into the future of the insurance industry. Our mission is to assist agents by creating a seamless fully automated exchange of information between insurance carriers, independent agents and consumers with an emphasis on “mobile first” technologies.

Gregory Sfoglia, CPA, Insurun Chief Executive Officer. Greg is the owner and President of a large and successful New York based Property & Casualty retail insurance binding authority with over 20 renowned national and regional independent insurance the industry is unparalleled and has been the driving force behind documenting and agent and aggregator in mind. Greg’s experience as a CPA at KPMG Financial Services & management as well as loss reserve and risk retention analysis. Greg holds a BBA in Accounting from Hofstra University.

Pete Sfoglia, PhD, Insurun Executive Vice President, Insurun Advisory Services. Pete presents insurun with 26 years as a Big-x consulting experience in IT Security, Business Process Re-engineering and Governance, Risk and Compliance management, 13 of those years as a Partner at EY, Accenture and Wipro. Pete brings a wealth of experience in insuring the integrity and safety of our customer information, garnering and nurturing customer relationships and helping companies utilize technology to streamline their business processes. As an academic, Professor Sfoglia is widely regarded as a research pioneer in the areas hedging Mortgage Backed Securities and the development of complex derivative financial instruments aimed at managing price risk in large portfolios of marketable securities in Hedge Funds. He has also researched and published on the deployment of his strategies in several Economic and Finance academic journals. Pete has studied under Nobel Prize Laureate Dr. Harry Markowitz at Baruch College where he published his first paper entitled "The Tax Effect of Stock Ex-dividend Behavior" and is an Adjunct Professor of Finance at Columbia University School of Business.

Mark has 17+ years of experience working with Fortune 500 companies to build large-scale, enterprise-wide process reengineering & automation programs, saving them well over $500M. He was appointed VP & Managing Director at BNY Mellon before age 30. He led the Global Operations team to achieve large-scale technology transformation initiatives, including creating a global process ownership program preparing the bank for large-scale automation. Mark was later promoted to Global Head of Intelligent Process Automation, where he led the bank’s 55,000-person Robotics Process Engineering team. This initiative won the 2016 Blueprism RPA award for Delivering Business Value. Mark holds a dual BA in Computer Engineering and German from Binghamton University. He also attended the University of Graz, where he studied German and International Relations.

Harikrishna Murali is a Chief Technology Officer, Equipped with a blend of technology know-how and Business acumen, I believe that the ever-changing business landscape in today's world constantly needs Innovative product solutions and with this belief, I served 'Cognizant Technology Solutions' for 8 years in the Product strategy and application design team working out of the United States and India. Currently with ISG Alsbridge venturing into the new world of opportunities in Robotic Process Automation(RPA).

With an engineering degree in Computer Science and hands an on experience in the field of process-centric application strategy & design, I have handled 75+ projects, as a Strategist to build a simplified process-centric application, interacting with various functional departments understanding the process and user workflow to help streamline the business process and application workflow. I strongly believe in “BP IS UI” which is “Business Process Is User Interface”. With exceptional knowledge in Business Analysis, Process Analysis, Process UI Alignment, User Task analysis, User Scenario mapping, Application portfolio analysis, Gap Analysis, User Research and UX design. I hold an enviable expertise in Product strategy, Solution approach, Estimations, Proposals & Client Presentations.

Anandhan is a system architect, software developer, and Integration specilist of having 14+ experience in software architecture, Cloud architecture and development. He is having Experience specializing in the design and production of Enterpricse Applications and service oriented architectures in the SaaS paradigm. Worked in major domains like Healthcare, Supply Chain, Financial Services, Public Sector, Oil & Gas etc.

You'll be able to manage your agency and agents, as well as run real-time quotes.